Cuddling with sea creatures has never been this cute. KONG CuteSeas are made of soft corduroy for snuggling. They also contain a squeaker and make a crinkle sound during playtime.

Another fave of my BC

This is not the first purchase from Perrormart. Highly recommended. Theyre not widely range but i can say 80% for what my furkid need they have it. At a reasonable price and also prompt delivery at only $25.

Thanks and my girl love the king seahorse very much. 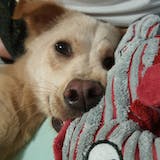 I bought the ‘small’ but it was a bit smaller than I expected. Would probably be a good size for a min pin or similar toy dog breed. There is some plastic in the fins, which make the crinkly sound. The fin was torn up in no time and my dog was eating the plastic. So beware. There is a squeaker in the seahorse’s belly which my dog enjoyed every time she bit down on it. However, that squeaker soon died. The material is textured, so I’m hoping it at least helps clean her teeth a little while she chews on it. I have the octopus (large) from the same range. If your dog likes to play tug and shake her toys, the octopus is more fun because the tentacles swing in different directions and allow you to hold on to at least one of the tentacles.